This enhanced multi-touch eBook made specially for iBooks transforms The Making of Star Wars: Return of the Jedi into an immersive multimedia experience worthy of the original film. It features exclusive content pulled from the Lucasfilm archives by author J. W. Rinzler:

Once again, the author’s unprecedented access to the formidable Lucasfilm Archives has yielded a mother lode of extremely informative, vastly entertaining, and often unexpected stories, anecdotes, recollections, and revelations straight from the closely guarded set of a big-screen blockbuster in the making. Brimming with previously unpublished photos, production artwork, script excerpts, exclusive intel, vintage on-set interviews, and present-day commentary, The Making of Star Wars: Return of the Jedi chronicles “how George Lucas and his crew of extroverted artists, misfits, and expert craftspeople roused themselves to great heights for a third time” to create the next unforgettable chapter in one of the most beloved sagas of all time. Get up close to the action and feel like a studio insider as

– creator George Lucas, Oscar-nominated screenwriter Lawrence Kasdan, and director Richard Marquand huddle in a script conference to debate the destinies of iconic Star Wars characters, as well as plot twists and turns for the epic final showdown between the Rebel Alliance and the Empire
– artists and craftspeople at the groundbreaking Industrial Light & Magic facility top their own revolutionary innovations—despite the infamous Black Friday—with boundary-pushing new analog visual effects
– a crack team of sculptors, puppeteers, actors, and “monster-makers” bring Jabba the Hutt and his cohorts to startling, slobbering life from the inside out
– a who’s who of heavyweight directors—from such films as Superman, Gremlins, Halloween, Dune, Scanners, and Time Bandits—are considered for the coveted job of bringing a new Star Wars adventure to the silver screen
– actors and crew race to the finish line at Elstree Studios, in a fiery desert, and beneath the trees of a dense redwood forest—before money runs out—to answer the questions that audiences had waited three years to find out: Is Darth Vader really Luke’s father, who is the “other”—and who or what is the Emperor? 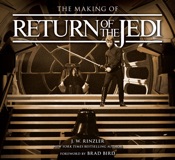