In 1975, a baby just minutes old is taken from its devastated mother. In 2010, the gruesome corpse of a nun is found in a Dublin public park. Detective Inspector Tom Reynolds and his team are on the scene and he’s convinced the murder is linked to historical events that took place in the infamous former Magdalene Laundries, institutions for “fallen women.”

As Reynolds and his team follow the trail to an isolated convent, everything seems perfectly normal and it seems perhaps they’ve followed the wrong lead. But it soon becomes disturbingly clear that the killer is amongst them and determined to exact further vengeance for the sins of the past.

The walls in this closed-room mystery narrow in on Reynolds and his team as they race to stop another murder in With Our Blessing, bestselling author Jo Spain’s U.S. debut. 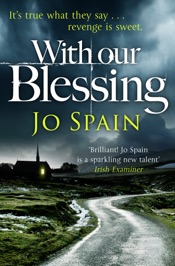